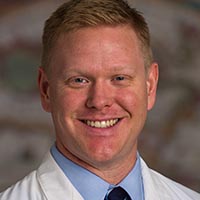 What factors increase a woman’s risk of endometrial cancer?

The number one risk factor for endometrial cancer is obesity. The extra adipose tissue makes extra estrogen, which stimulates the endometrium, and that stimulation can go awry into cancer.

Another risk factor is a genetic syndrome called Lynch syndrome, but it makes up less than 10 percent of endometrial cancer cases.

What are the symptoms of endometrial cancer?

The most common symptom of endometrial cancer is abnormal vaginal bleeding, including bleeding after menopause or bleeding in between periods for patients who are still cycling.

If we suspect a patient has endometrial cancer, we diagnose it with a biopsy – an endometrial biopsy, in which we collect a sample from the uterus. In some cases, we may perform a dilation and curettage (D&C) to scrape the entire inside of the uterus.

What is the treatment for endometrial cancer?

The standard treatment is hysterectomy. There are also some fertility-sparing treatments that involve hormones. Those are usually reserved for patients who want to get pregnant and to have that capability in the near future.

Treatment gets more complex when a patient is very obese or has multiple medical problems and surgery is not an option. Then we use other treatments, like hormones or radiation therapy.

What were the findings of your research on robotic and laparoscopic hysterectomy for endometrial cancer?

I think the important take-home point is that these procedures should be done minimally invasively, either laparoscopically or robotically, if possible. Most of the time, this allows the patients to go home the next day, and they have fewer surgical complications.