When people ask Juan Cabrera what kind of doctor he is, there is almost always a moment of awkward silence after he replies, followed by more questions.

Physical Medicine and Rehabilitation? So you’re a physical therapist.

“No, but I work closely with them.”

Physiatry is the other term for his specialty, but that causes more confusion.

“People think we’re mispronouncing it. They’re sure we mean psychiatry or podiatry.”

Even colleagues get it wrong, often calling it PMNR, with four letters, rather than the correct abbreviation of PM&R.

So any opportunity to talk about his chosen but often misunderstood field, Dr. Cabrera jumps at it.

He’s also happy to elaborate on the role PM&R will play at UT Southwestern Medical Center at Frisco when it opens Dec. 3. Plus his views on concussions and youth sports, Texas pride, the “I Heart Rehab” button he wears, and what it will be like to work alongside his wife, “The Smarter, Better-Looking Dr. Cabrera.”

“A lot of us say we’re The Rehab Doctors, but that’s an oversimplification. I usually tell people, whatever unfortunate or catastrophic injury can happen, whether it’s a stroke, a traumatic brain injury, a fall with multiple fractures, there’s a period of time when you’re not as good as you need to be. Rehab’s job is to coordinate a team to get you back there. Whether that’s getting you back to where you were before or getting you to a new normal.

“We cover the entire spectrum of life, from pediatrics to geriatrics, and the entire spectrum of health, from super healthy athletes to critically ill patients. And we work closely with everyone else involved, including physical therapists, occupational therapists, speech pathologists, rehab psychologists, and neuropsychologists, to give people the keys they need to get their life back.”

What drew you to PM&R and specifically brain injury rehabilitation?

“When I was a medical student, I thought I was going to be a surgeon, but it didn’t fit my personality. I liked pediatrics, internal medicine, neurology, and orthopedics. As I was reading about all of those, I discovered PM&R and realized that I could still see all of those same patients without giving up any of them.

“After undergrad at Notre Dame and med school in Mobile, Alabama (at University of South Alabama), I did a rotation at UT Health Science Center in San Antonio and I really fit with the specialty. I also liked taking care of patients with brain injury, specifically acute trauma rehabilitation. I continued focusing on that at Vanderbilt Medical Center, where my wife was doing an orthopedic surgery fellowship.”

What’s it like having two doctors in the family?

“My wife is Dr. Alison Cabrera, an orthopedic surgeon who will also be working at UT Southwestern Frisco. I feel very fortunate that she understands what I do on a day-to-day basis. I think it works for Alison, too, whom I always refer to as The Smarter, Better-Looking Dr. Cabrera.”

What’s it like living in the booming Frisco area?

“I was born in Guatemala, and my family moved to Birmingham, Alabama, when I was 3. When you don’t grow up in Texas, it doesn’t take very long to realize a couple of things: just how proud Texans are of Texas. And Frisco is a microcosm of that. People from Frisco really support Frisco. I think it’s a testament as to why you have so many opportunities in Frisco.

“Another big part of our lives is that we have two boys, and as much as we are proud of what we do professionally, the opportunity to come to Frisco gave us a lot of what we wanted for our family.”

What will UT Southwestern bring to the Frisco?

“UT Southwestern is unique in the sense that it’s bringing leading-edge research and nationally recognized care. In addition, being engrained in the day-to-day life of Frisco is going to be a valuable contribution. It’s great that we have a lot of physicians who already live and work and care about the community and the people who live there.”

Do you get a lot of questions about concussions?

“Football is the one I get the most questions about. Both anecdotally and research show there is more support for kids playing sports than there is against it. The benefits still outweigh the risks. But there’s still so much we don’t know, so we have to continue to advance our knowledge with injury and recovery. The truth is, if you were to snap your fingers and take away football, there would still be concussions in soccer, rugby, and lacrosse, or just kids being kids.”

Physical medicine and rehab: 'A specialty of hope'

Dr. Juan Cabrera, Medical Director of the Physical Medicine & Rehab team at UT Southwestern Frisco, specializes in getting people back to being themselves, and it something he loves doing. "I don't ever hesitate waking up in the morning to come do what I do."

Will concussion be a focus for the PM&R team in Frisco?

“We hope to grow a state-of-the-art, nationally recognized concussion care clinic. We are building the right team. Having Dr. Nyaz Didehbani is key. She specializes in neuropsychological assessment and is passionate about doing this at a high level.

“We are willing to see all of the challenging cases and are interested in helping that population that has gone through standard concussion treatments who aren’t getting the results they want. They  want somebody who will stick with them and try to figure out what’s the missing piece. That’s what we want to do.”

What kinds of patients might we see in the PM&R gym in Frisco?

“We will be receiving some referrals from the hospital (Texas Health Frisco, which shares the 20-acre campus just north of Eldorado Parkway and the Dallas North Tollway), but we will also be open to the community. Let’s say you have a family member whose mom had a stroke in Ohio but needs to move in with family now. They could come here for therapy and physician care. The gym, which is on the first floor, is designed well, with lots of space for patients to come in and move around and includes all of the latest equipment for strengthening and rehab.

Does the 'I Heart Rehab' button help you connect with patients?

“Yes, but there are times they don’t realize I’m their doctor. I don’t always like to wear my white coat, and I’m very conversational with my patients. So, occasionally, I’ll have to explain to them, yes, I am your doctor. But I take that as a compliment. I feel like I’m doing something right if patients are able to be comfortable with me.

“My favorite part of the job is connecting to the human side of the patient. Learning what they’re like. The sports teams they follow. What really gets them excited. Trying to figure out what they were passionate about helps me communicate with them and gets them to trust the rehab process.”

Despite the occasional confusion, it sounds like you love PM&R.

“Our specialty really is a specialty of hope as opposed to sadness.  A lot people ask us, ‘How do you do rehab? You see spinal cord injuries, brain injuries, strokes - that’s a really sad field to get into.’ But we really get to see the good part of it. We see people actually walking out of the hospital, coming in and getting things back they lost when this all happened. That sense of hope is what most of us in rehab really enjoy.” 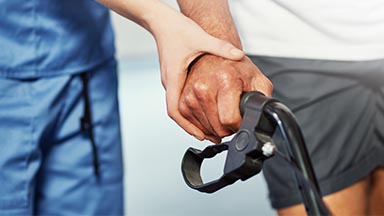 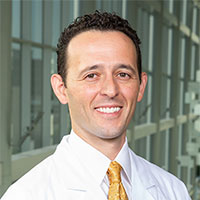