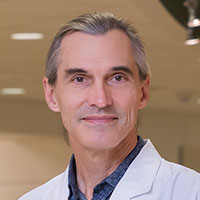 How does moyamoya syndrome affect the brain’s blood supply?

Moyamoya syndrome causes the carotid arteries – the large vessels that supply blood to the brain – to become progressively more narrow (stenosis) as they enter the skull, to the extent that they are eventually blocked (ischemia) completely. The resulting decrease in blood supply can result in strokes.

How is surgery for moyamoya syndrome different in children and adults?

When an adult with moyamoya syndrome has a blocked artery in the brain, the arteries in the scalp are usually large enough for a surgeon to connect one of them to an artery inside the skull in a surgery called an anastomosis. But because the arteries in children’s scalps are so small, we have to do a different operation to treat the condition.

To surgically treat moyamoya syndrome in children, we isolate the temporal artery (the one that pulses in the temple) and move it to the surface of the brain through a small window we open in the skull.