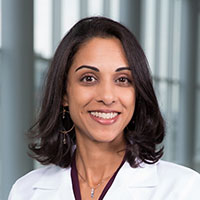 How do you test for cystic fibrosis?

A sweat test is the gold standard. This is a skin test to measure the chloride content on the surface of the skin.

If the test is positive or if there's any question about the result, we attempt to determine the exact genetic cause for their cystic fibrosis. We can do this by sending blood work to be analyzed for the most common, or even uncommon, gene mutations found in CF.

This test provides more information about prognosis and typical organ system involvement, and may allow for gene mutation targeted therapies.

What can a patient with CF expect to go through?

Everybody's a little bit different. Some people get diagnosed at birth and have early lung disease and early digestive disease. These patients tend to be sick more often and spend a lot of their youth in hospitals or doctors’ offices.

There are others who get diagnosed in their teens, 20s, or later, often because they had less severe problems that were not picked up until later, and they may lead much healthier lives.

However, the vast majority of CF patients will have significant digestive and respiratory disease with recurrent illnesses and infections. I think patients have to be prepared to have families and employers that understand this, insurance plans that can cover expensive medications, and a support structure to help them when they are ill.

How are new treatments improving care for CF patients?

Traditional treatments include pancreatic enzymes to help break down and promote absorption of important protein, nutrients, and vitamins to aid in normal growth and development. Most patients also receive breathing treatments geared toward thinning out their mucus and antibiotics to fight off the infections in their lungs and sinuses.

But a whole new set of treatments has now come in the form of pills. They are oral therapies targeting the specific gene that causes that patient’s CF – a form of personalized medicine.

For example, there are people with gene mutations in which the change in the single base pair can cause an early stop signal in the gene, which means the whole protein is not made. There are other people who have a change in their CF gene where the protein is made, but it doesn't fold properly. It gets stuck in the cell, so the CF channel never gets to the cell surface to pump out chloride. Others make the CF channel protein and it gets to the cell surface, but just does not conduct chloride appropriately. These differences may account for some of the variability in patient outcomes.

We now have pills geared toward fixing some of these CF channel problems. It doesn't actually fix the genes, but it fixes the protein problem to some extent. It's a huge feat and the first step toward a cure for these patients.

What is a common misconception about cystic fibrosis?

For many years, people thought of CF as a disease of kids, because it was. Very few lived long enough to become adults. But with improved therapies and care, the adult population is now almost equal to that of the kids. This is important for patients and physicians to know.

Adult cystic fibrosis patients can now lead better and healthier lives. CF adults are finishing college, getting married, having kids, and finding successful careers. They're everywhere in the community and we are proud of them.