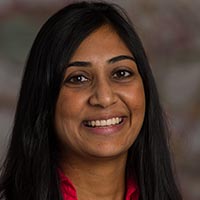 What are the most common complications in pregnancy and how to you treat them?

The most common pregnancy-related complications encountered during pregnancy are vaginal bleeding and preterm labor.

Vaginal bleeding, depending on the trimester, etiology, and degree of bleeding can be concerning and require inpatient care. In other cases it can be monitored on an outpatient basis and resolve on its own. Preterm labor usually requires inpatient treatment and may be temporized to delay delivery and get the maximal fetal maturity possible.

From a maternal standpoint the most common complications encountered during pregnancy are hypertension and diabetes. Just as we are seeing increasing numbers of these two conditions in the general population, we are also seeing them more and more in the pregnant population.

Hypertension requires careful monitoring during pregnancy and medication therapy in many cases. It places the mom at increased risk for preeclampsia and other serious complications such as stroke, and the baby at risk for growth abnormalities and premature birth.

Diabetes usually requires treatment with insulin during pregnancy and places the woman at increased risk for having a cesarean delivery rather than a vaginal birth and the baby at risk of birth trauma and admission to the neonatal intensive care unit for blood sugar monitoring.

What does amniocentesis predict – and what doesn’t it predict?

When we perform amniocentesis, we’re looking at whether a baby has aneuploidy, or an abnormal number of chromosomes, which would tell us about certain birth defects or syndromes. It can also tell us if the baby has a specific genetic mutation that we may be worried about based on something that was found on ultrasound or if there is a family history of a genetic disorder.

In regards to aneuploidy, for the vast majority of amniocentesis tests that we do, the chromosome count is normal. That means your baby has the normal number of chromosomes – but it does not predict whether or not your baby will be normal, however you define that.

There is a wide variety of other testing that you might do if there are indications of health problems with the baby. What would that include?

We’re able to diagnose more and more through ultrasound. And one thing that’s evolving more and more now is fetal MRI, where we do an MRI on the mom to actually get a look at the baby. That allows us to better delineate some of the anomalies that we identify via ultrasound; it also allows us to provide better counseling for parents in terms of the care that their baby is going to require and what we can offer them once the baby is born.