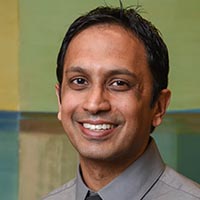 You said that liver cancer is very common in Texas. What do you attribute that to?

Is liver cancer one that can be cured?

Yes. Liver cancer can be cured a couple of different ways if it is diagnosed early enough, and patients have a very good chance for long-term survival afterward. With some patients, we can resect it, or remove the cancerous parts of the liver. We can also do what’s called radiofrequency ablation to burn the cancer and get rid of it that way. And eligible patients can receive a liver transplant, which is one of the best treatments. With a transplant, you get rid of the liver cancer and the cirrhosis. However, these curative options are only available if the cancer is found early enough. That is something that we need to work on given that most patients with liver cancer are still diagnosed at late stages.

What are a patient’s chances for survival?

Seventy percent of patients live five years or more if we diagnose and treat it early. Unfortunately, few patients are found at an early or curative stage. Most patients have fairly advanced tumors at time of diagnosis. Although we have therapies for advanced liver cancer, they are generally not curative. When it’s found at a late stage, the average survival is less than one year. My hope is that in five to 10 years, we can really make strides in diagnosing people earlier.

There seems to be a heavy marketing push for certain cancers, such as cervical, colon, or breast cancer, especially if a celebrity is involved. Why don’t we hear as much about liver cancer, especially since, as you say, it’s a fast-growing one?

Breast, colon, and cervical cancers occur in the general population, which means everyone is at risk. It’s much easier to do education and screening campaigns to the general public. Liver cancer, however, primarily develops in people who have underlying liver disease, and any kind of marketing campaign would likely need to be targeted to those people rather than the general public. Also, liver cancer has not historically gotten much press; however, it is becoming much more common, so publicity about the disease will likely increase over the next several years.