Michele Alkalay, M.D., is an Assistant Professor in the Department of Pediatrics at UT Southwestern Medical Center. She specializes in celiac disease, inflammatory bowel disease, and irritable bowel syndrome.

Dr. Alkalay is a graduate of the University of Oklahoma and earned her medical degree at the Sackler School of Medicine in New York. She performed her internship and residency in pediatrics at UT Southwestern and Children’s Medical Center Dallas, where she also completed advanced training through a fellowship in pediatric gastroenterology, hepatology, and nutrition.

Certified by the American Board of Pediatrics in both pediatrics and pediatric gastroenterology, she joined the UT Southwestern faculty in 2012.

She is the Founder and Director of the Celiac Disease Program at Children's Health Plano, and she is involved in the Gluten Intolerance Group of Greater Dallas and GenerationGF of Dallas, which provides resources for children who are gluten free. She is also a member of several professional organizations, among them the Celiac Disease Foundation; the North American Society for Pediatric Gastroenterology, Hepatology & Nutrition (NASPGHAN); the Dallas County Medical Society; and the Texas Medical Association.

Prior to joining UT Southwestern, Dr. Alkalay practiced in New York and received recognition as a top physician in the Brewster area, being named a Leading Physician of the World & Top Healthcare Professional by the Internal Association of Healthcare Professionals. She was also recognized in The Worldwide Leaders in Healthcare and in Cambridge Who's Who Doctors of America. She has received top patient satisfaction scores in American Medical Group Association (AMGA) patient surveys.

In Texas, Dr. Alkalay has been recognized as one of the best pediatric specialists by D Magazine and as a Super Doctor Rising Star. She has also been named in Becker's Hospital Review’s list of GI Physicians to Know, Texas Top Docs, and Who's Who Doctors of America. 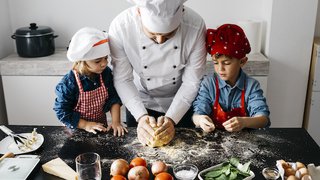 Growing up gluten-free: The best treatment for kids with celiac disease

Dr. Alkalay talks about her approach to patient care.