In the early 19th century, doctors began to connect a baby's health at birth with certain long-term disabilities. For example, fetal distress – reduced oxygen during delivery – could result in brain damage that caused lifelong mental and physical challenges.

This led doctors to consider how they might detect fetal distress during labor, and heart rate was a logical starting place. A doctor would hold a stethoscope to the woman's belly, listen, and count the heart rate manually.

Short bursts of fast or slow rates are normal at certain stages of labor. But long or unexpected changes can indicate the baby is getting too little oxygen. Physicians wondered if this knowledge could help prevent intrapartum stillbirths or the development of cerebral palsy.

Over the years, sound-magnifying devices were developed to aid in monitoring. However, by the 1950s, doctors and scientists were envisioning ways to capture fetal heart rates electronically for more precise measurement. The first commercial electronic fetal heart rate monitor (EFM) was released for purchase in the U.S. in 1968. Within 10 years, the technology was used in 50% of California deliveries.

In 2008, The National Institute of Child Health and Human Development brought together obstetrics experts to define EFM terminology and standardize best practices for interpreting EFM readouts and patterns. Today, the guidelines are considered the go-to resource for EFM utilization.

Catherine Spong, M.D., our Chief of the Division of Maternal-Fetal Medicine at UT Southwestern, participated in that exercise. "The goal was to bring experts together to review the available data on EFM and come to an agreement on the data – and where it was lacking – in an expert opinion," said Dr. Spong.

Today, 85% of all deliveries in the U.S. involve continuous EFM, which monitors the baby for the entire labor and delivery. The doctor may select internal EFM, in which a small electrode is attached to the baby's scalp to track its heart rate, or external EFM, in which you'd wear two belts around your abdomen – one to record the baby's heart rate and the other to track your contractions.

For high-risk pregnancies, in which the fetus may be more at risk for labor complications, continuous EFM is recommended. But for the majority of low-risk deliveries, EFM doesn't appear to improve outcomes.

Many experts think that in low-risk pregnancy, auscultation – periodic checks of the fetal heart rate – is sufficient. So, why do so many hospitals use EFM for normal deliveries?

Because EFM can be useful, with the right combination of other strategies. Let's take a look at what started the fetal monitoring trend in low-risk deliveries and how UT Southwestern incorporates the technology to improve outcomes for mothers and babies.

Why EFM was linked with cerebral palsy

The use of continuous EFM began in the 1960s, when doctors thought the technology could help reduce rates of cerebral palsy – a neurological condition that affects 1 in 500 babies, causing limited vision, mobility, and communication abilities.

Back then, doctors thought complications from labor and delivery were the main cause of cerebral palsy. Specifically, they were concerned about hypoxic ischemic encephalopathy (HIE) – a birth injury caused by reduced oxygen to the fetus during delivery.

Doctors hoped that continuous EFM might help reduce rates of cerebral palsy by identifying fetal distress and allowing them to quickly delivering the baby with forceps or vacuum assistance, or by cesarean section (C-section) before brain damage could occur.

Today, we know HIE is the explanation for cerebral palsy in only a small number of cases - about four in 10,000. The majority of HIE cases are caused by brain damage or events that occurred during pregnancy, not during birth. Accordingly, the use of continuous EFM has not been shown to reduce rates of cerebral palsy.

Research also shows that continuous EFM does not improve Apgar scores (a quick health assessment after birth) or rates of neonatal intensive care unit (NICU) admissions. However, studies have shown that use of continuous EFM can lead to higher rates of C-sections and operative vaginal deliveries.

Continuous EFM on its own is not widely effective for reducing poor birth outcomes. However, when the technology is combined with other health care strategies, it can help spare babies from long-term complications.

1. Use standard terminology with specific actions

Since everyone on the care team uses the same terms to describe a low, fast, or otherwise abnormal heart rate, we can quickly understand the situation.

The full team is trained to respond in certain ways to specific changes in the fetal heart rate pattern. This strategy leaves less room for individual interpretation, so patients get the care option that is known to be most effective for the baby and least invasive for them.

For example, research shows that using a checklist to match EFM readout trends with particular next steps, such as ordering further tests or recommending operative delivery, can result in better outcomes. Some of these positive results may include fewer NICU admissions, reduced cases of low Apgar scores, and lower C-section rates.

Optimal obstetric care requires a mindset that all members of the care team – patient techs, nurses, midwives, and doctors – are valued for their knowledge about the patient and are encouraged to actively speak up about care.

Rates of newborn complication increase when the second stage of labor runs long – that’s the amount of time after the cervix is completely dilated before the baby is born. A study of more than 53,000 laboring women found that babies born to patients who pushed for longer than two hours were at increased risk for adverse newborn outcomes, including HIE and seizures.

It's important to note that the overall risk for adverse neonatal outcomes is relatively low. This same study found that more than 97% of babies did not experience complications, regardless of whether the mother pushed for one hour or more than four hours.

During the second stage of labor, we carefully monitor for fetal distress and the patient's progress toward delivery. If we identify a potential concern, we talk with the patient about the risks and benefits of continuing to push versus operative vaginal delivery or C-section.

The use of EFM technology has its upsides, but it can't tell us everything. Too often, providers may recommend C-section when EFM readings are inconclusive. However, C-section requires more maternal risks and a longer recovery. So, we try to help patients achieve vaginal delivery when possible.

Talk with your doctor about how they use EFM and how it might benefit your baby. When we use it in conjunction with proven protocols and your unique birth preferences, we can achieve more positive outcomes.

To visit with a maternal-fetal medicine doctor, call 214-645-8300 or request an appointment online.

Is it safe to get pregnant during the COVID-19 pandemic?

Is it safe for pregnant moms to take a road trip during COVID-19?

New and expecting moms: Don’t skip these health visits during the pandemic 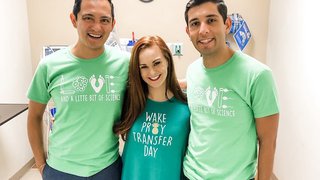 What's it like to be a gestational carrier? Nicky's story