What causes nosebleeds in pregnancy, and tips to manage them

Pregnancy is full of quirky side effects – including nosebleeds. One in five patients get nosebleeds during pregnancy (epistaxis), compared with 6% of women who get them when not pregnant.

Over the course of pregnancy, your total blood volume doubles to support the growing baby. To accommodate this extra blood, the blood vessels in your body dilate. The pressure of the extra blood can sometimes cause the more fragile vessels to rupture and bleed more easily.

Your nose is rich in tiny blood vessels that can get dried out from normal breathing, which can lead to breakage and bleeding. For most pregnant patients, the occasional minor nosebleed is no cause for alarm. It’s mostly just annoying.

I've invited my colleague, Ashleigh Halderman, M.D., an ear, nose, and throat specialist from UT Southwestern's Otolaryngology Department, to talk about what causes nosebleeds during pregnancy, how women can prevent them, and how to stop them when they do occur.

Even when you aren't pregnant, you're more likely to get a nosebleed with a cold, sinus infection, or allergies. But approximately 20% of women experience pregnancy rhinitis – inflammation and swelling of the mucous membranes in the nose.

Pregnancy rhinitis causes congestion, postnasal drip, and runny nose. And when you're constantly blowing your nose, you're more susceptible to having a bloody nose.

Certain medical conditions such as high blood pressure or clotting disorders can cause nosebleeds as well.

You may also get a nosebleed if the membranes in your nose dry out and crack due to cold weather, dry air, or intense air conditioning.

Pregnancy tumor: A rare cause of nosebleeds

Also known as a pyogenic granuloma, a pregnancy tumor is a noncancerous, rapidly growing mass of capillary blood vessels that bleeds easily. Research suggests the masses form due to the influx of hormones during pregnancy.

Approximately 5% of pregnant women develop pregnancy tumors, which typically form in the gums between the teeth but can also form in the nose. The masses can appear anywhere on the body and generally disappear after the baby is born.

Treatment usually consists of either a medicated gel or nasal spray, which helps control bleeding. Some women need to have the tumor removed if it is causing breathing problems or excessive nosebleeds. The exact procedure to remove the tumor depends on where the tumor is located. For pregnancy tumors of the nose, most can be removed endoscopically without any external incisions or stitches.

Related reading: 5 weird pregnancy symptoms you might not know about

How can I prevent nosebleeds during pregnancy?

While it’s not possible to prevent all nosebleeds, there are few things you can do to avoid irritating the sensitive blood vessels in your nose.

● Moisturize the inside of your nose: Use a bit of saline nasal gel to lubricate dry or irritated nasal passages.

● Use a humidifier: Because dry air increases the risk of nosebleeds, adding a little moisture to the air can do wonders.

● Drink plenty of fluids: This keeps your mucous membranes well hydrated and less likely to dry out and crack.

● Treat colds and allergies: Talk to your doctor about which over-the-counter medications may be best.

Be especially gentle after a nosebleed. Your nose needs to heal, so don’t blow it too hard or stuff tissues in the nostrils, which can prolong bleeding.

How to stop a nosebleed and when to see your doctor

Can bumping my belly hurt the baby?

It's a common question that tends to linger on the minds of first-time expectant mothers. Our specialist provides the answers.

If you do get a nosebleed during pregnancy (or any other time):

● Pinch both nostrils and maintain pressure for 10 to 15 minutes

● To help constrict the blood vessels and slow bleeding, you also can apply a cold pack or ice over the bridge of your nose or use a nasal spray such as Afrin before pinching the nostrils together

Call your health care provider if you experience more than a couple nosebleeds during pregnancy, or if:

● You have trouble breathing

● You become lightheaded or disoriented

Pregnancy can cause strange things to happen to your body. While nosebleeds generally are nothing to be overly concerned about, talk to your doctor if you are worried. We're always available to help you feel more comfortable during pregnancy. 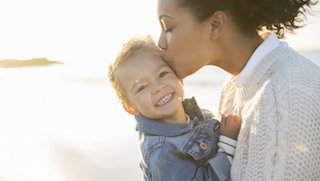