What women need to know about measles and pregnancy

In 2000, the government determined that measles had been eliminated in the U.S. But in 2019, we're seeing a resurgence of the disease that is putting pregnant women, babies, and other vulnerable populations across the country at risk.

The rise in measles can be attributed to many factors, including:

Nine out of 10 people who haven’t had the measles before or haven’t been vaccinated will come down with the illness when exposed. Even those who have been vaccinated can get measles, though symptoms might be less severe.

While measles in pregnant women has not been shown to cause birth defects in the developing fetus, research suggests that exposure to the virus can increase the risk of miscarriage and preterm birth. However, the measles vaccine is given as part of the measles, mumps, and rubella (MMR) vaccination and cannot be given during pregnancy.

The recent increase in confirmed cases of measles has led the American Congress of Obstetricians and Gynecologists (ACOG) and researchers from the University of Washington to update measles prevention guidelines for pregnant and reproductive-aged women at high risk of infection.

The revised guidelines include three main considerations for women:

If you are considering pregnancy, this is the perfect time to check your immunization record.

If you are pregnant and you are exposed to measles, contact your doctor right away. You might be able to receive a treatment to reduce the likelihood of infection.

After pregnancy, consider getting an MMR vaccine if you aren’t immune. It is safe for breastfeeding women and babies.

Even if you have no desire to become pregnant, getting an MMR vaccine can help protect your health and the health of others in the community who are at risk for infection, including pregnant women, infants, and people with weakened immune systems.

Related reading: Beyond healthy babies: Why we discuss vaccines, maternal health during pregnancy

Patients with measles are considered contagious as early as four days prior to breaking out with the signature measles rash. Early symptoms include fever, cough, and general weakness and fatigue. A red, bumpy rash follows, typically after 14 days of exposure.

We recommend that patients consider vaccination for themselves before pregnancy and discuss vaccination with family members and friends who will be around the baby.

The health of women and babies is our utmost concern. If you're concerned that you've been exposed, call your doctor right away. If you aren't sure about your vaccination history or know that you need the MMR vaccine, call 214-645-8300 or request an appointment online.

Headache and migraine remedies that are safe during pregnancy

Should I have visitors in the hospital while my baby is being born?

Who should consider low-dose aspirin to prevent preeclampsia?

How can I use fenugreek to increase my breast milk supply?

Beyond healthy babies: Why we discuss vaccines, maternal health during pregnancy 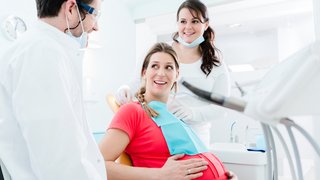 Can I go to the dentist when I’m pregnant?