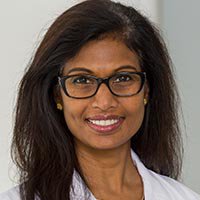 It is now generally well known that PARP (poly ADP-ribose polymerase) inhibitors exert their anticancer effects by preventing DNA repair, ultimately resulting in cell death. However, in addition to their role in homologous recombination repair, PARP proteins have roles in other pathways (for example, transcription, chromatin regulation, and RNA processing), and PARP inhibitors appear to have therapeutic effects in cancers without known DNA repair defects. [1,2]

In the Department of Obstetrics and Gynecology at UT Southwestern Medical Center, my colleagues and I are striving to develop a new biomarker that accurately reflects patient molecular phenotypes and can predict PARP inhibitor sensitivity.

This biomarker is ADP-ribosylation of the tumor proteome. ADP-ribose is a sugar-based molecule that is commonly added to proteins after their synthesis. This post-translational modification might involve the addition of a single ADP-ribose unit or multiple units forming oligomer or polymer chains. Depending on the protein to which these monomers or polymers are attached, the number of ribosylated sites the protein has, and the cellular circumstances, these additions confer different biological meanings and physiological functions. [3]

The most broadly used antibody that detects ADP-ribose polymers can recognize chains only longer than ~10–15 units. [4] However, this antibody does not detect monomers or oligomers, which are also likely to have important biological functions. Thus, our team recently developed a set of reagents that can recognize all ADP-ribose chain lengths, including monomers. [5]

Using this new toolkit, we conducted a preclinical study to assess the variability of ADP-ribosylation levels across the proteome in ovarian cancers. We also measured levels of PARP-1 protein and tumor gene expression. Tissue samples of 34 high-grade serous ovarian cancers were obtained during preplanned cytoreductive surgery. [6]

Together, these results suggest that ADP-ribosylation might be a useful biomarker for PARP inhibitor sensitivity in ovarian cancers, independent of BRCA1/2 or homologous recombination deficiency (HRD) status. [6]

“By refining our ability to personalize treatments that target cancer cells at the molecular level, we endeavor to continue improving survival rates.”

This work was largely attributable to the collaboration between the Division of Gynecologic Oncology and W. Lee Kraus, Ph.D., Director of the Cecil H. and Ida Green Center for Reproductive Biology Sciences.

Building upon that study, we are now recruiting patients for a surgical window trial. This trial has a unique study design. Treatment-naïve patients with breast or ovarian cancer will first undergo a biopsy, followed by administration of a PARP inhibitor for seven days. Patients will then undergo a surgical procedure or a repeat biopsy. This study design will allow us to look at the molecular genetic changes that occur within the ovarian or breast cancer cells in response to the PARP inhibitor.

If we are able to show that ADP-ribosylation, indeed, can predict or indicate cell death, then in the future we might be able take a sample from a patient’s tumor, stain it for ADP-ribosylation, and use that stained proteome pattern to determine the best treatment for that patient.

By refining our ability to personalize treatments that target cancer cells at the molecular level, we endeavor to continue improving survival rates.

Jayanthi Lea, M.D., is an Associate Professor in the Department of Obstetrics and Gynecology at UT Southwestern Medical Center. Her translational research interest is in the development of clinical trials for ovarian cancer using novel therapeutic agents. She has published several papers on cervical and ovarian cancer.