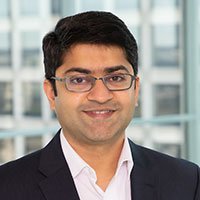 Ram Mani Ph.D. Assistant Professor in the Department of Pathology and Urology

Recent findings by researchers at UT Southwestern could open up an entire new field focused on enhancers that could lead to novel prostate cancer therapies.

As an Assistant Professor with a joint appointment in the Departments of Pathology and Urology at UT Southwestern Medical Center, my research group is focused on the study of molecular genetic and epigenetic events associated with cancer development, with the underlying aim of translating this knowledge into novel diagnostic, prognostic and therapeutic strategies. We utilize integrative approaches that include cell-based assays, studies using animal models, analysis of human cancer specimens, and next-generation sequencing.

While two-dimensional genomic sequencing methods have contributed to the detection of thousands of enhancers in prostate cancer, the targets of the majority of these enhancers have not been well characterized. It remains uncertain whether individual enhancers regulate one or many genes and, contrarily, whether single genes are regulated by one or multiple enhancers in prostate cancer. This knowledge gap has hindered overall understanding of the regulatory targets of somatic mutations and germline risk alleles present in some intergenic regions. [1]

In a recent genomic study, my colleagues and I characterized the three-dimensional landscape of RNA polymerase II–associated chromatin interactions in normal prostate and malignant cells using a technique called ‘ChIA-PET,’ short for chromatin interaction analysis by paired-end tag sequencing, which allows pairing of enhancers to their gene targets. ChIA-PET sequencing is a technique used to map associations of particular proteins with DNA across the entire genome and can identify all the enhancers and their target gene at the same time. [1]

By pairing thousands of enhancers to their target genes, the researchers detected thousands of transcriptional network hubs functioning within the framework set by structural proteins, such as CTCF and cohesins. Further integrative analyses revealed numerous mechanisms of transcriptional regulation and dysregulation in prostate cancer. Furthermore, the team uncovered many germline and somatic DNA alterations that rewire the landscape of RNA Pol II interactions in prostate cancer.

The team also discovered a genetic interaction between the germline risk allele rs684232 and the somatically acquired TMPRSS2-ERG suggesting a potential role of epistasis and modifier genes in modulation of prostate cancer risk.

We defined a germline-somatic interplay between the prostate cancer risk allele rs684232 and the somatically acquired TMPRSS2-ERG gene fusion in the transcriptional regulation of multiple target genes, including VPS53, FAM57A, and GEMIN4.

“Looking ahead, we anticipate that this work will create fertile avenues for further research in transcriptional regulation and cancer development.”

We characterized the landscapes of transcription in prostate cancer and uncovered thousands of RNA polymerase II–associated long-range chromatin interactions. These results have multiple implications ranging from basic biology to cancer etiology and risk.

Our research group is actively engaged in identifying the DNA damage and repair pathways that mediate cancer-specific recurrent genomic rearrangements and resistance to targeted therapies, as well as the functional consequences of epigenetic and transcriptional deregulation in cancer development. Collectively, these studies will serve as the basis for early cancer detection and therapeutic targeting. [1-3] Looking ahead, we anticipate that this work will create fertile avenues for further research in transcriptional regulation and cancer development.

Eliminating Socioeconomic Disparities in Care for Patients with Testicular Cancer