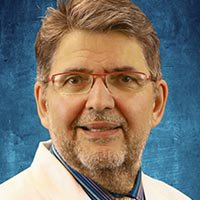 Cross-disciplinary teams are working to improve the patient experience by mitigating the side effects of surgical treatment and radiation therapy.

The American Cancer Society estimates approximately 191,930 men will be diagnosed with prostate cancer in 2020. [1] Prostate cancer is the second leading cause of cancer death in men in the U.S., and approximately 1 in 41 men will die of the disease. [1] Various prostate cancer screening tests are currently available, including the prostate-specific antigen (PSA) blood test, digital rectal exam (DRE), and imaging tests, such as multiparametric magnetic resonance imaging (MPmri) and transrectal ultrasound (TRUS). [1]

Overdiagnosis and overtreatment are two key issues with prostate cancer screening today. Conventional treatment strategies, such as radiation therapy (RT) and surgery, have been associated with various adverse effects, including urinary issues and sexual dysfunction. Active surveillance (AS) is an approach that may be used in patients with low-volume, low-grade disease. The advantage of AS is the potential to avoid the toxicity of treatments. AS involves the use of close monitoring with PSA testing and examination as well as periodic prostate biopsies to evaluate for progression of disease. [1]

While the benefits of AS are evident, a common barrier to uptake is a higher likelihood of disease progression. Previous studies have demonstrated that with AS alone, progression can occur in up to 30% of patients, with some patients choosing traditional treatment methods due to anxiety around the risk of progression. [2]

“There is a risk of progression to more aggressive forms of disease in about 15-25% of patients with low-risk disease.”

“There is a risk of progression to more aggressive forms of disease in about 15-25% of patients with low-risk disease,” says Yair Lotan, M.D., Professor of Urology and Chief of Urologic Oncology at UT Southwestern. “Currently, there are no approved therapies that have been shown to reduce the risk of progressive disease. The goal of our work is to introduce a nontoxic intervention with fewer side effects to reduce the risk for progression.”

A critical need exists to develop effective nontoxic compounds that slow prostate cancer growth. One promising agent is curcumin, which is a widely reviewed nutraceutical that has previously been considered safe to consume.

UT Southwestern is the sponsor of the phase three Randomized, Double-Blinded, Placebo-Controlled Trial of Curcumin to Prevent Progression of Biopsy Proven, Low-Risk Localized Prostate Cancer in Patients Undergoing Active Surveillance. [2] The primary outcome of the study is the number of patients who have progressed at 24 months of follow-up, defined using standard criteria for progression.

“The reason we were attracted to curcumin is because of the interesting data in cell lines, but animal models have also shown it has potential to slow the growth rate of prostate cancer,” says Dr. Lotan, who treats patients with bladder, prostate, kidney, ureteral, and testicular cancer. His nationally recognized research on urine and molecular markers helps to identify patients who are at higher risk for recurrent cancer.

Simmons Cancer Center’s world-class team of cancer specialists has adopted cutting-edge therapies that might reduce the acute and chronic side effects associated with radiation and surgery. One product in active development, used in conjunction with RT, is the SpaceOAR hydrogel. The purpose of SpaceOAR is to temporarily position the anterior rectal wall away from the prostate during RT to reduce the radiation dose delivered to the anterior rectum. [5]

At Simmons, we were one of the first in the nation to embrace new technology using a gel-like substance that is injected into the space between the rectum and the prostate and eventually solidifies. During the time of radiation treatment, the gel will prevent the radiation from reaching the rectum.

Claus Roehrborn, M.D., a world-renowned urologist and recognized expert on cancerous prostate diseases, has been practicing at UT Southwestern for more than 20 years and has served as the Chair of the Department of Urology since 2002. His practice focuses on the treatment of prostate cancer and benign prostatic hyperplasia (BPH).

Simmons Cancer Center offers comprehensive integrative care for all oncology patients, including the latest advances in genetic testing. One area of active research at Simmons is evaluating the utility of genetic testing to assess the hereditary risk of cancer. Several gaps in genetic testing exist today, including gender inequities, such as the ratio of women to men acquiring testing (5:1). Other gaps include African American men having a higher lifetime risk of developing prostate cancer, and lack of education among patients and referring physicians on the availability and costs of testing. Around 90% of patients who meet their insurance criteria for testing end up paying less than $100 out-of-pocket, and the cost is only $250 for patients who pay 100% out-of-pocket.

The most significant risk factors for contracting prostate cancer are age, race, and family history, and there are several key reasons to have genetic testing performed based on these risk factors. Primarily, having a first-degree relative with prostate cancer will put men in the same family at about a 30% higher risk of developing the malignancy. Additionally, outcomes for patients could be improved if they better understand their genetic risk, often allowing them to adopt lifestyle changes based on results. Lastly, genetic testing may help inform selection of specific gene therapies.

One Simmons-affiliated trial, the phase two TRITON2 study, evaluated the clinical utility of the PARP inhibitor rucaparib in patients with metastatic castration-resistant prostate cancer (mCRPC) and deleterious non-BRCA DDR gene alterations. [8] TRITON2 enrolled 78 patients who had previously advanced on one or two lines of next-generation androgen receptor-directed therapy and one taxane-based chemotherapy. [6] Among evaluable patients, radiographic and PSA responses in the ATM cohort were detected in 10.5% and 4.1% of patients assessable for each endpoint, respectively. Overall, the results suggest that mCRPC patients with abnormalities in other DDR-associated genes might benefit from PARP inhibition. [6]

I am eager to see how testing of prostate cancer genetics will allow treatment to be tailored to the patient, and over the next five years, we’re going to see a huge shift in how many people obtain genetic testing for prostate cancer

A Pioneer in Plasma Cell Disorders