Raquibul Hannan, M.D., Ph.D., Professor and Chief of Genitourinary Radiation Oncology Service, became fascinated with cancer as an undergraduate at New York University. His curiosity led him to pursue a combined medical degree and Ph.D. at State University of New York at Brooklyn from 1999 to 2006. For his Ph.D. research he worked on the immunology of pancreatic carcinogenesis and discovered a novel marker for pancreatic cancer. Following a medical internship the next year, he completed his residency in radiation oncology at Montefiore Medical Center and Albert Einstein College of Medicine in 2011.

Dr. Hannan is knowledgeable in a range of radiation techniques including IMRT, IGRT, linac-based SRS, SBRT, and intracavitary and interstitial brachytherapy.

As an expert in these areas as well as a leading young researcher on the topic of immunologic effects of radiation treatment and immunotherapy in general, he holds two international patents and has presented his findings at symposiums and conferences around the world.

What if the body’s own immune system could fight off cancer? How does radiation treatment affect the patient’s immune response to cancer? These have been particular areas of interest and research for Dr. Raquibul Hannan. As a board-certified radiation oncologist and an expert in radiation therapy for patients with genitourinary cancer, he feels research into strategies for combining immunotherapy with radiation therapy is an effective means of maximizing the treatment outcome for his patients.

"One of the motivations I have in doing translational research is to improve my patients’ cancer outcome. I will go out of my way to make sure the patient is getting the right treatment and whatever is best for his or her outcome.”

Genitourinary cancers include prostate, kidney, bladder, penile, testicular, and ureteral cancer. External beam radiation, including intensity-modulated radiation therapy (IMRT), image-guided radiation therapy (IGRT), and stereotactic body radiation therapy (SBRT), typically plays a key role in the treatment of these cancers. As a scientist, Dr. Hannan is exploring strategies of combining immunotherapy with radiation therapy. As a physician, he will do whatever it takes to make sure a patient is getting the right treatment and achieving the best outcome possible.

State-of-the-art technology in radiation equipment and a cutting-edge scientific environment drew Dr. Hannan to UT Southwestern Medical Center. The latest technology makes a big difference in caring for patients, he says. “The better the technology, the more precise the delivery of radiation, which spares the normal structures and eradicates the tumor,” he says. 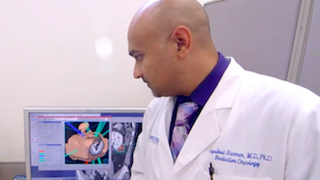