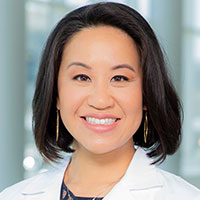 Too many times I’ve seen women ignore abnormal bleeding or pelvic pain because they think it’s “normal.” In reality, these symptoms can be signs of abnormal cell growth in the uterus, also known as the “womb,” a major female reproductive organ.

Each condition causes symptoms that can negatively impact women’s quality of life, such as pain, abnormal bleeding, and fertility issues. However, treatment is available through medication or surgery, depending on a woman’s specific needs.

Fibroids are benign tumors made of smooth muscle of the wall of the uterus and can range in size from a grain of rice to a watermelon. They are very common – up to 70 percent of Caucasians and 80 percent of African-Americans will have them by age 50.

Women who are of reproductive and premenopausal age are most likely to experience symptoms, which occur in about 30 percent of cases and can include:

If left untreated, more serious problems can arise. For example, large fibroids can press on the other organs in the abdomen and pelvis, including bowels, bladder and blood vessels. The pressure can cause symptoms or silently cause harm, such as reducing the flow of urine from the kidneys or predisposing women to blood clots in the legs. Fibroids also can distort the uterine cavity, which could result in difficulty getting pregnant.

If women don’t have bothersome pelvic pressure or pain, we usually start with medication – birth control or progesterone hormones pills – to manage abnormal bleeding. Surgical treatment also is available to women whose symptoms don’t improve with medications or who are having more bulk related symptoms. Options can include:

A hysterectomy is usually reserved for when other treatments don’t work. It is the only treatment that provides certainty of no recurrence, but it does cause women to lose their ability to carry their own pregnancies.

"Too many times I’ve seen women ignore abnormal bleeding or pelvic pain because they think it’s “normal.” In reality, these symptoms can be signs of abnormal cell growth in the uterus, the main female reproductive organ."

Endometrial polyps are abnormal overgrowths of the cells that line the uterus and extend into the uterine cavity. The majority are benign, but cancer can be found in them too. Uterine polyps are rare in women younger than 20, typically affecting premenopausal and postmenopausal women. Women who are obese and those who take tamoxifen, a common drug prescribed after breast cancer, also are at increased risk of developing polyps.

Abnormal bleeding is the most common symptom, which can mean:

We can identify polyps through transvaginal ultrasound, which entails placing a small device in the vagina that emits sound waves, creating an image of the uterus and showing us the growths. Alternatively, we can use hysteroscopy, which involves placing a small, thin camera into the uterus so we can look for polyps. Removing symptomatic polyps generally is recommended to treat the problems and diagnose any concerning cells. The surgeon will use a small, thin instrument and a hysteroscope to identify and remove polyps with little to no pain.

Adenomyosis is the enlargement of the uterus due to tissue that normally lines the uterus growing into the muscular wall of the organ. The cause of adenomyosis is unknown, but we usually see it in women in their later reproductive years. In the past, researchers have estimated that 20 percent of women develop adenomyosis. An exact percentage has not been determined, however, because a definitive diagnosis can be made only by microscopic examination of the uterus following a hysterectomy.

Symptoms of adenomyosis can include:

Treatment options include hormone medications, such as birth control pills, progesterone, or intrauterine devices (IUDs). Endometrial ablation is an effective surgical option, or a hysterectomy might be recommended if medication doesn’t work.

At UT Southwestern, we customize treatment to each patient’s needs, including offering medication or minimally invasive treatments whenever possible. This allows patients to avoid undergoing open surgeries, which are more extensive and require longer recovery times.

Women shouldn’t hesitate to visit a doctor if they experience abnormal bleeding or pelvic pain. Fighting through symptoms is unnecessary – especially with the wide variety of ways to diagnose and treat the conditions. To find out what treatment is best for you, call 214-645-8300 or request an appointment online.

What women and men need to know about reproductive coercion