February is American Heart Month. As the14th approached this year, I found myself thinking about some of our patients for whom Valentine’s Day carries special meaning.

One of these patients is Stefanie Rose, whose youngest son, Devin, was born with a rare congenital heart defect. In April 2016, our Maternal-Fetal Medicine team at UT Southwestern worked closely with The Heart Center at Children’s Health to give her son a chance at life. Devin is now just a couple months shy of his first birthday.

For a little Valentine’s Day inspiration and to hear Stefanie’s journey in her own words, read on:

My husband, Dan, and I have been married for 13 years. We have three other boys, ages 9, almost 7, and almost 4. I also have an in-home photography business and specialize in photographing newborns. So when I found out I was pregnant for a fourth time, we thought we knew what to expect.

Then, at about 15 weeks, we went in for an ultrasound to find out the gender. The ultrasound tech noticed right away something was wrong with Devin’s heart and sent us to a specialist who confirmed Devin’s condition was serious.

We were scared and worried, so we decided to get a second opinion through Children’s Health in Dallas, who recommended we also see the obstetricians at UT Southwestern for prenatal care, and that was very good.

When we got our second opinion at Children’s Health, we found out Devin did indeed have a congenital heart condition called hypoplastic left heart syndrome (HLHS) with intact atrial septum. Congenital heart disease happens in 1 of 111 births. HLHS is one of the most complex of these diseases, and with the intact septum it is the most severe version of HLHS.

We were immediately told the outcome could be very grim. HLHS is scary enough, and the intact septum just increased his risk.

Fortunately, my doctors at UT Southwestern, Dr. Santiago-Munoz and Dr. Patel, were really familiar with the condition and had delivered babies with HLHS before. I also had regular appointments from 22 weeks on with the Fetal Heart Program at Children’s Health to keep a close watch on Devin’s development.

We were still scared of what could happen, of course, but we also knew we were getting the right care to give Devin the best possible chance.

Because it was a high-risk pregnancy, I had a lot more appointments and ultrasounds. All of the techs let me ask questions and told me exactly what they were seeing and what it meant. I really appreciated how open they were with me and all the explanations they provided about what we were up against.

Everyone – the doctors, the technicians, and the nurses – eased our fears by being honest about the inevitable risks and how they planned to avoid them.

It takes a village: Devin’s delivery

I was 38 weeks pregnant when we induced labor. That morning, there were probably 30 to 40 people in the room waiting to spring into action.

On the one hand, it was really reassuring to have all these people there, knowing they were all there to take care of Devin. But it also underscored the seriousness of the situation and how different it was from my previous pregnancies.

Not only was Dr. Patel there with her team, but the Heart Center and NICU teams from Children’s Health were also in position, ready to wheel Devin into surgery as soon as he was born.

The delivery went as smoothly as it possibly could have. Dr. Patel was just awesome during labor. She was so encouraging and motivating, and the people helping her were fantastic. The woman who did my epidural also knew exactly what she was doing – she said Devin would come around 10 o’clock in the morning, and he was born at 10:04 a.m.

After Devin’s birth, I didn’t get to hold him because the Children’s Health teams went immediately to work. Because I couldn’t see him, the NICU doctor told me exactly what was happening to him as it was happening. Again, I really appreciated that commitment to communication.

The doctors placed Devin in this special cart and very quickly wheeled him across the sky bridge from Parkland’s Labor and Delivery to Children’s Medical Center Dallas, where he had a procedure to open his intact septum. Because I couldn’t go with them, one of the nurses from Parkland went and took pictures so she could show me what they were doing.

Dr. Patel strongly supported me so that I could be discharged as early as possible and go over to be at Children’s Medical Center with Devin. That was huge.

Home away from home: Devin’s recovery

We basically lived at the Children’s Medical Center ICU for the next two months. Nine days after his birth and surgery to remove his intact septum, Devin had open-heart surgery to begin treating his HLHS. He had to stay in the hospital as he recovered from the surgery and his lungs struggled to work on their own.

From the beginning, the Children’s Health staff was so accommodating. His doctors and nurses listened to us and told us to advocate for our son, even if that meant we sometimes disagreed on certain things. They were also really good with our other children, helping us explain what was happening with Devin and what it meant.

We are really grateful to everyone at the Heart Center for the level of care and support they provided and continue to provide us. When we went back for Devin’s second surgery, it felt like we were going home because we had developed such strong relationships with the doctors and nurses.

Now, Devin is home and on the mend. He’s still behind where a normal 9-month-old would be, and that can be hard sometimes. But he’s alive, and we count every day with him as a blessing.

February has taken on a whole new meaning for us as a family, what with it being National Heart Month and Valentine’s Day. Going forward, we definitely want to help spread awareness for congenital heart conditions. We’re also getting close to Devin’s one-year birthday, a major milestone for kids born with HLHS.

All in all, we have a little more to celebrate this Valentine’s Day. In this house, it’s also another excuse to eat more candy!

I love Stefanie’s story for several reasons. First, it is a testament to her and her family and all they’ve been through over the last two years. We care for many patients and families with similar stories. Second, it shows the power of relationships, like those between UT Southwestern, Children’s Health, and Parkland to provide care for children born with serious medical conditions.

Today, Valentine’s Day, and for the remainder of American Heart Month, I hope you’ll think of Devin and Stefanie and the importance about heart health for all.

More in: Your Pregnancy Matters, heart 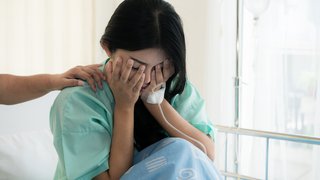 It’s not your fault: Understanding miscarriage

Headache and migraine remedies that are safe during pregnancy

Should I have visitors in the hospital while my baby is being born?

Who should consider low-dose aspirin to prevent preeclampsia?

How can I use fenugreek to increase my breast milk supply?

Beyond healthy babies: Why we discuss vaccines, maternal health during pregnancy