What women should know about chickenpox, vaccination, and pregnancy

Before a vaccine became available in 1995, chickenpox was almost considered a childhood rite of passage. But while many people have tales of chickenpox parties – purposely infecting kids to “get it out of the way” – it’s important to remember this isn’t an entirely harmless disease. In the early 1990s, up to 13,000 people were hospitalized due to the virus and 100 to 150 people died each year.

It’s estimated that in the U.S., more than 3.5 million cases of chickenpox, 9,000 hospitalizations, and 100 deaths are prevented by the chickenpox vaccine each year. Chickenpox is still with us, and it can have devastating consequences, particularly for pregnant women and their babies.

In 2021, a woman in Illinois contracted chickenpox early in pregnancy and gave birth to a premature baby who died shortly after delivery. It was confirmed the baby had congenital varicella syndrome – chickenpox in utero.

The Centers for Disease Control and Prevention (CDC) recommends that all adults be assessed for immunity to chickenpox. So, don’t be surprised if your healthcare provider asks you about chickenpox if you are pregnant or are thinking about becoming pregnant. As always, we just want to keep you and your baby as safe and healthy as possible.

Potential complications of chickenpox in pregnancy

Chickenpox is a highly contagious disease caused by the varicella-zoster virus. Chickenpox generally causes an itchy, blister-like rash. But pregnant women are at risk for more serious complications, particularly pneumonia, because changes in the immune system during pregnancy make them more susceptible to infection.

Pregnant women also can pass the virus to their babies. Much like rubella or Zika, if a woman gets chickenpox in her first or early second trimester, the virus can cause birth defects. Symptoms of congenital varicella syndrome can include:

If a woman develops chickenpox shortly before going into labor, the newborn is at risk of being born with chickenpox. While such complications are rare, it’s important to take steps to prevent them, to be aware of their potential, and be on the lookout for chickenpox during pregnancy.

Are you at risk for chickenpox?

While the chickenpox vaccine has been around since 1995, there is still a population of women who are susceptible to the disease. This includes women who:

For the last several decades, about 90% of children have gotten vaccinated against chickenpox, which means 1 in 10 of our younger pregnant patients may not be immune to the virus.

If you don’t have documentation of being diagnosed with or vaccinated against chickenpox as a child, your healthcare provider may suggest blood testing to determine whether you have antibodies to the varicella-zoster virus. If you don’t, we recommend you get two doses of the chickenpox vaccine before pregnancy or after delivery.

If you were born before 1980, you are presumed to be immune to chickenpox due to the number of circulating viruses when you were young. However, women who are immunocompromised, pregnant, or a healthcare provider should get tested for antibodies due to increased risks of getting or spreading the virus if they do not have good records of having received the vaccine.

Related reading: Why we discuss vaccines, maternal health during pregnancy

Can you get the chickenpox vaccine during pregnancy?

The chickenpox vaccine contains a live attenuated (inactive) virus – similar to the measles, mumps, and rubella vaccine (MMR) – so you cannot get vaccinated if you are currently pregnant. However, we will strongly suggest you get a first dose of the vaccine after you give birth to protect you, your baby, and future pregnancies. The vaccine is safe for breastfeeding women and babies.

If you know you haven’t had chickenpox or the vaccine and you’re thinking about having a baby, talk to your healthcare provider about getting and finishing the vaccine series at least three months before you start trying to get pregnant. This is the best way to protect yourself and your baby from chickenpox.

Related reading: Which prenatal vitamins should I take?

One more note: The varicella vaccine also potentially protects you from shingles, another painful adult virus. Shingles is a reactivation of the chickenpox virus, and it can cause a painful rash along with headache, chills, upset stomach, and eye problems. If you’re vaccinated against chickenpox and never get the disease, you’re protected against shingles as well.

Chickenpox is not as common as it used to be, but it’s still around – and it’s still potentially dangerous. The good news is there are ways we can protect ourselves and our children. Talk with your healthcare provider about your chickenpox history and whether you should get the varicella vaccine before or after pregnancy.

For more information about the varicella vaccine and whether you need it, call 214-645-8300 or request an appointment online. 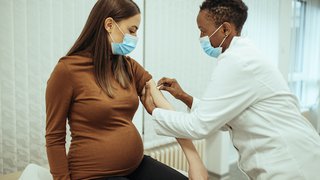 How to manage and reduce the risk of gestational diabetes

What moms should know about forceps and vacuum deliveries