For Jonathan White, M.D., the road to neurosurgery started with an interest in psychology. Fascinated by how the mind works, he majored in psychology at the University of New Mexico, then decided to go to medical school to study psychiatry. In his third year as a medical student, he did a rotation in neurosurgery and was, he says, hooked, finding it a field in which one is “often able to make a difference in people’s lives by performing some surgery on them that alters their function and helps restore them. That is really quite unique and rewarding.”

Dr. White trained in neurosurgery at UT Southwestern and immediately joined the faculty, where he is a Professor in both the Neurosurgery and Radiology (Neuroradiology) Departments and holds the Birsner Family Professorship in Neurological Surgery. He specializes in blood-vessel problems occurring in the brain, such as brain aneurysms, arteriovenous malformations (AVMs), and stroke and mini-stroke. He also cares for patients with normal-pressure hydrocephalus, chronic facial pain, and other cranial nerve compression syndromes.

In addition to his medical role at UT Southwestern, Dr. White has been an administrative leader and a member of numerous hospital committees, assisting in emergency department planning, operating-room leadership, and stroke-treatment planning.

Research has also been an important part of Dr. White’s career. Some of his studies evaluate how post-operative neurosurgical patients do over time.

“We are constantly refining who's the right candidate for which procedure,” he says. “Are we actually beating the natural history of the disorder with surgery, or is it better just to leave  it alone?” Through such research, for example, surgeons have learned that some AVMs are less dangerous than they seem and are best left untreated. Another group of research projects involves testing and refining devices in the endovascular field. “We’ve got smaller catheters, softer balloons, softer coils, and coils that detach more quickly,” he says. ”Because UT Southwestern treats so many patients with endovascular techniques, we participate in the development and testing of these devices.”

A leader in his field, Dr. White is Past President of the Rocky Mountain Neurosurgical Society and a member of the Cerebrovascular Section Executive Committee of the American Association of Neurological Surgeons. He was included in D Magazine's Best Doctors list for 2018 and 2021.

Dr. White has delivered lectures to fellow neurosurgeons at Yale University, the European Society of Minimally Invasive Neurological Therapy, and the Society of Neurointerventional Surgery. He serves as a peer reviewer for the prestigious journals Neurosurgery and Journal of Neurosurgery and has published numerous book chapters and peer-reviewed articles on topics including endovascular coiling, aneurysm, stroke, and AVM.

When a disease in the brain needs a neurosurgeon’s touch, there are several possible routes to the problem spot. The surgeon can cut through the skull and access the brain directly. Another way to get to the brain is to follow the same path blood does – through the arteries by threading a wire along an artery from the groin up to the brain (a minimally invasive approach known as endovascular surgery). Finally, when crucial blood vessels are blocked, neurosurgeons can create an alternate route for the blood using bypass techniques – just as cardiac surgeons do for patients with heart disease.

"I think the philosophy that’s important is that when it comes down to decision making, the most important thing is to put the patient’s needs first."

Jonathan White, M.D., is one of a few neurosurgeons who can do all three. After training in traditional open neurosurgical techniques and cerebral bypass, he completed a three-year fellowship in endovascular surgery (also known as interventional neuroradiology). This unusually broad training allows Dr. White plenty of flexibility in choosing the right course for his patients.

In his practice, Dr. White focuses on the treatment of brain aneurysms, arteriovenous malformations (AVMs), and cerebral ischemia. He also cares for patients with normal-pressure hydrocephalus and for patients with chronic facial pain, such as trigeminal neuralgia.

For a great many of these patients, Dr. White’s endovascular toolbox is just right. “For people who are having recurrent TIA [mini-stroke] or stroke symptoms, we have angioplasty and stenting for the intracranial vessels,” he explains. “We have catheters that can inject [the clot-busting drug] tPA when people have acute stroke. We have a microsuction vacuum cleaner to clean out the artery. The most recent generation is a stent that crushes the clot up against the vessel wall. As you pull the stent out, it pulls the clot out with it.” Dr. White also uses endovascular techniques to treat some AVMs and aneurysms.

Not content merely to operate, Dr. White holds a number of leadership roles at UT Southwestern. He has served as the Chief of Medical Staff at the University Hospital and is currently Medical Director of the operating room. As Director of Neurosurgery residency at UT Southwestern, he is in charge of training the next generation of neurosurgeons. In all these roles, Dr. White says, his goal has been “to help improve the patient experience, to improve the quality of care, to decrease complications – and just make that human experience a little better for everybody.” 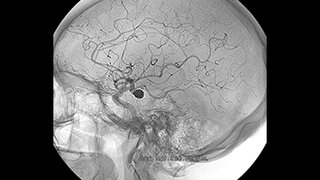 The ‘other’ stroke: How brain aneurysms affect stroke risk