When Ralph Cousins describes the hole in his head, he tries not to sound overly dramatic:

“I guess it’s about the diameter of a coffee can.”

How it got there, how it was surgically reconstructed at UT Southwestern, and how the 71-year-old Dallas man is still walking this earth – much less traveling, volunteering with non-profits, and playing with his grandkids – well, that is quite remarkable.

One morning in 2012, Mr. Cousins woke up and noticed blood on his pillow. Three hard bumps on his head, which he worried might be skin cancer, turned out to be something much more rare: angiosarcoma, an aggressive form of cancer that affects the lining of blood vessels.

For every million people in the U.S., one will be diagnosed with angiosarcoma each year, according to the National Cancer Institute.

Surgery, radiation, and chemotherapy directed by his oncologist at another medical facility in Dallas worked initially, but the angiosarcoma resurfaced three years later in 2015 in a lymph node in Mr. Cousins’ neck.

Then in January 2019, he noticed an unusual spot on the original wound and a scan found a tumor. This time it was inside the skull, straddling the superior sagittal sinus – a large vein that runs from the front of the brain to the base. Surgery would be risky, at best, several doctors told him.

Knick that vein and “you’ll be hearing the angels sing,” one told him.

But Mr. Cousins and his wife, Harriet, “the rock” in their 42-year marriage, were not about to give up.

“We knew it would be a moonshot, and that we might only have one chance,” says Mr. Cousins. “But never in the seven years since I was first diagnosed have we discussed the possibility that the cancer would win.”

A referral to UT Southwestern gave them their moonshot.

Dr. Samuel Barnett, a neurosurgeon, and Dr. Purushottam Nagarkar, a plastic surgeon with expertise in microsurgical reconstructive techniques, reviewed the case and then met with the Cousins to discuss the options.

“We were scared to death, puddles on the floor, as I like to say” says Mrs. Cousins. “Then Dr. Nagarkar, with that bright smile, looked me in the eye and said, ‘We can do this.’ And with those four words it was like the weight of the world had been lifted off my shoulders. I still tear up thinking about it … and I knew then we were in good hands.”

The surgery would not be easy, taking nearly 10 hours and requiring deft teamwork.

Dr. Barnett first removed the skin, bone, and a portion of the dura, the protective membrane surrounding the brain, so he could delicately resect the tumor – all while avoiding the sagittal sinus. He also removed a large amount of bone that had been damaged by radiation over the years.

Dr. Nagarkar then dissected Mr. Cousins’ latissimus dorsi, a large muscle in his back, using a microvascular technique to keep the blood vessels intact. He reconnected those vessels to some in the neck, re-establishing blood supply. Using a free-flap reconstruction technique, Dr. Nagarkar sewed the remainder of the muscle into Mr. Cousins’ head.

It was a high-stress day in the OR, admits Dr. Nagarkar.

“It’s fairly common to use a free-flap to fix a leg wound,” he says. “But when the patient has a large hole in his head and you are looking directly at his brain, you know it has to work. There’s no coming back tomorrow to try again."

Mr. Cousins spent several days in the ICU, where Dr. Nagarkar and the nursing staff used a Doppler wand to monitor the blood flow in his surgically reconnected vessels.

A skin graft from his thigh was added over the flap for an extra layer of protection for his brain.

“At first, it looked like I had a sausage going up my neck and across my head, but the doctor told me the muscle would atrophy and eventually shrink down to the normal contours of my head,” he says. “The new tissue is much healthier, and the procedure worked like a champ.”

When his angiosarcoma returned in early 2019, Ralph Cousins was told by several doctors the tumor on his skull was in too precarious of a position to be safely removed. Hanging onto hope, he turned to UT Southwestern, where two gifted physicians – a neurologist and a plastic surgeon – teamed up to save his life.

Less than a year after the surgery, Mr. Cousins has already traveled to Nashville to spend time with his two grandchildren, and he’s planning a road trip to Durham, N.C., to welcome his third grandchild in January.

He knows there’s a chance the cancer could return. But for now life, like his head, feels whole again.

“I am unbelievably fortunate on so many levels,” he says. “Medical science is advancing so fast, and we live in a community with such broad expertise. I can’t help but feel optimistic about sticking around until I’m at least 85.”

“And the skill of my physicians … I should break out a marching band and parade for them … I’m so grateful for people like Dr. Nagarkar and Dr. Barnett. They are medical marvels. Without them, I might not be here.” 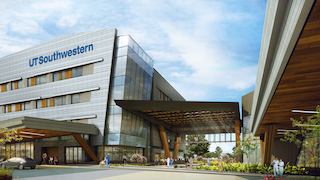 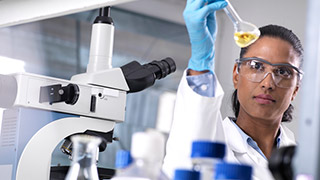 Our teams of internationally recognized scientists and clinicians are creating breakthroughs in the prevention and treatment of neurological disorders through world-class research and clinical trials. 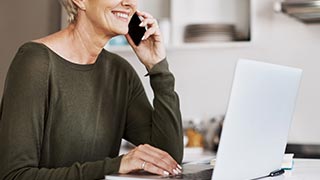