The Consequences of Understaging Gastric Cancer 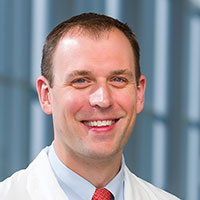 Matthew Porembka, M.D. Associate Professor of Surgical Oncology in the Department of Surgery

Patients with nonspecific symptoms that overlap with the symptoms of gastric cancers should be evaluated at a center with extensive experience in treating these cancers.

People with gastric cancer often have non-specific symptoms, including weight loss, bleeding, abdominal pain, and acid reflux. Healthcare providers often fail to suspect gastric cancer and treat these symptoms as uncomplicated gastroesophageal reflux disease. As a result, patients with gastric cancer can often face delays in cancer diagnosis. Clinical staging for gastric cancer relies on multiple imaging tests, endoscopic procedures, and sometimes even laparoscopy. Ordering the appropriate staging work up and correct interpretation of the results by providers is necessary for accurate determination of clinical stage. Accurate clinical staging is critical for treatment selection and prognostication.

We found approximately 40% of patients (1675/4244 ) were understaged, having more disease than expected, and we found that many patients had disease in the lymph nodes or even metastatic disease. Increased likelihood of inaccurate clinical staging was associated with clinical stage T2 tumors (which have invaded the stomach muscle layer), non-well differentiated tumors, and diffuse-type histology.

The implications of this inaccurate clinical staging are significant. The standard of care for patients who have regional disease that has spread to the lymph nodes is a combination of chemotherapy and surgery to reduce the risk of cancer recurrence. Treatment begins with the chemotherapy, which is important because it treats any micrometastatic disease that may be present. People who have chemotherapy before surgery tolerate the chemotherapy better. For patients who go to surgery first and have lymph node disease, as many of the patients in our study did, that opportunity to control micrometastatic disease is missed.

When being treated for gastric cancer, treatment facility type also mattered. Patients treated at academic or integrated cancer network centers were less likely to be inaccurately staged than those treated in the community setting. Additionally, inaccurately staged patients were more likely to receive appropriate neoadjuvant therapy after being clinically understaged at these facilities compared with community facilities. Thus, the implication would be that if a patient has one of these rarer cancers, they should be seen at a center with substantial experience treating patients with gastric cancers to ensure accurate staging and optimal treatment.

In summary, at a national level, we observed inadequate clinical staging of gastric cancers. As a result, opportunities for appropriate treatment are being missed, and understaging is negatively affecting patient survival outcomes. Therefore, we recommend that patients with nonspecific symptoms that overlap with the symptoms of gastric cancers should be evaluated at a center with extensive experience in treating these cancers.

To gain more insight into adequate clinical staging, we are now studying the barriers to care experienced by patients who are evaluated at our clinic. For example, it is common for patients to visit their primary care physician or an emergency department multiple times with complaints of non-specific symptoms. We want to know which specific barriers prevented them from having a gastric cancer workup and earlier treatment. These finding will potentially help us design novel strategies to improve patient care and ensure prompt clinical staging.

Eliminating Socioeconomic Disparities in Care for Patients with Testicular Cancer