UT Southwestern Medical Center researchers are leaders in learning more about Down Syndrome and understanding how to care for persons with the genetic disorder. UT Southwestern and Children’s Health specialists work together in the only Down Syndrome Clinic in North Texas.

Diagnosed in infancy, Down Syndrome is a genetic disorder that includes a combination of birth defects, including some degree of mental retardation, characteristic facial features, and often, heart defects, visual and hearing impairment, and other health problems. The severity of these problems varies.

Down Syndrome is one of the most common genetic birth defects, affecting approximately one in about 800 to 1,000 babies. There are more than 400,000 individuals with Down Syndrome in the United States.

Medical care is focused on treating the health, intellectual, and social challenges associated with the disorder. There is no cure for Down Syndrome.

What Causes Down Syndrome?

Types of Down Syndrome

In 1 percent to 2 percent of cases, a form of the disorder called Mosaic Down Syndrome may occur when an error in cell division occurs after fertilization. These individuals have some cells with an extra chromosome 21 and others with the normal number.

A person with Down Syndrome will have some, but not all, of these features:

Individuals with Down Syndrome have a variety of health problems, including: 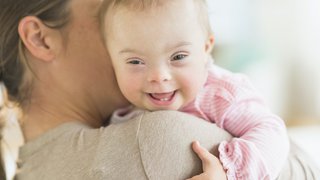