Teresa Chan-Leveno, M.D., is an Associate Professor of General Otolaryngology in the Department of Otolaryngology-Head and Neck Surgery at UT Southwestern Medical Center.

Dr. Chan-Leveno earned her medical degree at Drexel University College of Medicine in Philadelphia. She completed an internship in general surgery and a residency in otolaryngology-head and neck surgery at Boston Medical Center.

Among the honors and recognitions Dr. Chan-Leveno has received are the UTSW Department of Otolaryngology Resident Appreciation Award and the American Medical Women’s Association Janet M. Glasgow Memorial Achievement Award.

She is a member of the Alpha Omega Alpha medical student honor society.

We often take basic functions such as breathing, eating, swallowing, hearing, smelling, and tasting for granted – but we know quickly when something is amiss. That’s where otolaryngologist Teresa Chan-Leveno, M.D., comes in.

“As a general otolaryngologist I see a wide variety of conditions, ranging from the routine to the rare,” Dr. Chan-Leveno says. “And sometimes ENT (ear, nose, and throat) problems as different as allergic rhinitis and a skull base tumor can present with similar symptoms, such as a runny or clogged nose.”

Even when a persistent otolaryngology condition seems more annoying than frightening, it’s worth getting checked out, Dr. Chan-Leveno says.

“I enjoy the challenge of combining my expertise and experience to figure out what’s really going on with a patient and then address it with appropriate treatment. And if a runny nose is no more than what it initially seemed to be – such as a seasonal allergy – I often help people to find more effective solutions to their problems by taking the time to help them understand their disease processes better. All of my patients are scientists in some way – they want to understand and solve their own problems."

When ENT conditions are more complicated, Dr. Chan-Leveno’s “super-sleuth” approach to diagnostics kicks into high gear. For example, new patients may come to her complaining of severe, unrelenting throat or ear pain.

“I’ve often had patients referred to me who have tried lots of things – even had ear surgery or had their tonsils removed – and nothing has worked,” she says. “But I can put together the symptoms and recognize that they may have, for example, Eagle’s syndrome – a painful elongation or calcification of a bone in the lower part of the skull. Getting to the right diagnosis after a long trial is reward in and of itself, but as a surgeon I am also able to often help to resolve the problem as well as diagnose it.”

Other conditions that Dr. Chan-Leveno treats include obstructive sleep apnea, malignancies of the head and neck, and dysphagia (swallowing problems), which may stem from cancer treatments, autoimmune disease, or an anatomical cause such as Zenker's diverticulum.

The tools and techniques Dr. Chan-Leveno uses are as varied as the conditions encompassed by otolaryngology.

“I try to be a ‘one-stop shop,’ because I offer such a broad range of services,” she says. “And as a general otolaryngologist, I tend to think of the connectedness of different areas rather than someone’s ear problem separate from their throat problem. Often the simplest answer is the right one.”

Dr. Chan-Leveno points out that the varied surgical procedures of otolaryngology have one key thing in common: the potential to drastically change a patient’s appearance because they occur in the most visible parts of the body.

“Whatever type of procedure we do, we always do it in the least invasive way possible,” she says. “Part of our training as ENTs is facial plastics, so we are always thinking about how to minimize the cosmetic impact of surgery. I might select endoscopic techniques to treat one condition but rely on larger, soft-tissue skills for another.”

“We have a lot more familiarity with serious ENT conditions simply because, as an academic medical center, we see them often,” Dr. Chan-Leveno adds. “So we can often suggest less drastic options than may be available in other settings. We can recommend a procedure and tell patients that we have performed it 10 times in just the past month, so they can rest assured that they will do well.”

It’s an approach appreciated by patients who have been previously told elsewhere that they would require a surgical procedure with devastating consequences, such as the woman who recently came to see Dr. Chan-Leveno about a large mass in one of her salivary glands.

“She had been told by the first surgeon she consulted that she would have a large incision and her face would be paralyzed on one side after the procedure,” Dr. Chan-Leveno recalls. “Using a small incision, we were able to avoid that outcome. The mass turned out to be benign, and she was very grateful that we spared her facial nerve.” 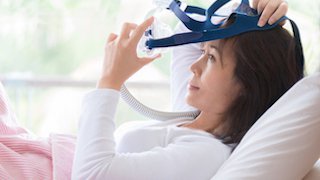 How a sleep apnea implant may lower your heart disease risk