Melanoma is the deadliest form of skin cancer and among the top four most commonly diagnosed cancers in patients age 20 to 39. Approximately 100,000 new cases of melanoma will be diagnosed in the U.S. in 2020, representing more than 5% of all new cancer diagnoses.

A decade ago, there were next to no treatment options for metastatic melanoma. Today, there are many, including immunotherapy, which can dramatically increase survival rates – if certain precautions are in place.

The Food and Drug Administration (FDA) approved immunotherapy drugs for melanoma in 2011, and between 2013 and 2017 death rates decreased 7% a year in patients age 20 to 64.

I've witnessed the power of immunotherapy for melanoma in patients such as Terry Hart. A marathoner and triathlete, Terry beat skin cancer twice. When it came back with a vengeance a third time, he opted for immunotherapy. Throughout treatment, Terry met with cancer specialists, but also pulmonologists, endocrinologists, urologists, dermatologists, and plastic surgeons.

His journey to recovery was arduous. But his perseverance and the skill of his care team got him through the side effects and immunotherapy gave him a new lease on life.

Beating melanoma is a marathon, not a sprint

As told by Terry Hart

My melanoma story started in 1999 with the discovery of a tumor on my left bicep. I'm now a retired attorney, and I was fortunate that my law partner at the time suggested I go to UT Southwestern for treatment.

The doctors removed the tumor and nearby lymph nodes. I was sure I had beaten it and that I was good to go. And for 14 years, I was.

In 2013, another tumor popped up close to the location of the original melanoma. That’s when I met Dr. Froehlich. Under his guidance, the cancer team removed the tumor and I underwent radiation. Again, I thought that was that.

Less than a year later, I noticed a spot on my right arm. I had seen enough at that point to know it was skin cancer. But it was in an entirely different location, and I knew that was not good.

Before we initiated treatment, Dr. Froehlich and the team discussed the risks with me. They said I should prepare for a long road and steep challenges – and they were right. We started with ipilimumab in October 2014. That held the cancer at bay for a year, but the tumors began to grow again. By then, nivolumab had been approved by the FDA. I started another round of immunotherapy using both drugs.

Ipilimumab helps promote the growth and function of T-cells – the white blood cells of the immune system that help fight diseases such as cancer. Nivolumab supports the cancer-killing actions of these cells. Together, the drugs give melanoma a one-two punch. Dr. Froehlich also recommended radiating a few of the tumors on my skin during my second immunotherapy treatment. He had read a recent study concerning another cancer that suggested doing this would highlight the tumors for the immunotherapy drugs and show a path to the tumors.

The response was dramatic – my tumors were shrinking. But our challenges were only beginning.

"As a triathlete and two-time Boston Marathoner, I knew I could dig deep mentally. And despite the challenges of immunotherapy, it was working. My tumors were shrinking. We were nearing the finish line."

The first side effect I experienced was panhypopituitarism, an immune response that caused my pituitary gland to produce too few hormones. The immunotherapy was also compromising my liver functions. I completed three of the four immunotherapy infusions, but we decided to go with only the nivolumab on the fourth and final infusion.

Then in July 2016, I began to feel pain in my fingertips shortly after my immunotherapy had concluded. I started taking blood thinners to improve blood flow to my fingers.

Unfortunately, the blood thinners caused bleeding in my stomach. We stopped the pills and I stayed in the ICU for three weeks. All I could eat was broth, so I lost 45 pounds during this time. I was pretty fit then, so I didn't really have extra weight to lose – I looked like a stick figure.

At the beginning of treatment, Dr. Froehlich made it clear that immunotherapy, while effective, can cause unexpected side effects. Patients commonly experience flu-like symptoms and skin itching or discoloration. My body's reaction was more extreme. However, because I was being cared for by a team of experts in immunotherapy, they were able to contain and manage the side effects without compromising my cancer treatment.

On the bright side, I got to watch the Olympics and a lot of Cubs games while I was in ICU! But stopping the blood thinners led to additional problems. Gangrene set in on my fingertips, and I developed antiphospholipid syndrome (APS), an autoimmune disorder that increases the risk of blood clots. So, I started a new medication to counter these issues. Thankfully, plastic surgeons only had to remove the tip of my right index finger – the other digits healed completely.

As a triathlete and two-time Boston Marathoner, I knew I could dig deep mentally. One more mile. One more lap. One more day. And despite the challenges of immunotherapy, it was working. My tumors were shrinking. We were nearing the finish line.

Researchers at UT Southwestern and the Simmons Cancer Center have uncovered why immunotherapy works for some patients but causes autoimmune complications in others. The findings could help clinicians better customize treatments.

By September 2016, a PET scan showed I was cancer-free.

Immunotherapy protocol at that time required I get boosters of nivolumab for a year. In May 2017, I developed my final immunotoxicity – pneumonitis. The condition is a well-known side effect of nivolumab, and it's like a severe case of pneumonia.

Rounding into the home stretch of treatment, I went on a high dose of prednisone. Steroids bloat you up – I transformed from looking like a stick figure to resembling the Pillsbury Doughboy for several months!

Through it all, I had an amazing mentor and dear friend who had survived lung cancer and melanoma. He was given six months to live 12 years before my melanoma reappeared and he's still going strong today.

As an athlete and an attorney, I've always been mentally tough. But this was much more of a mental load than I'd ever taken on. I definitely had my bad days. When I would begin to get low, I would think about my friend. If he could do it, so could I.

Giving thanks and giving back

Fighting metastatic melanoma was a long, hard road, and I was extremely fortunate. But more than anything, I had an incredible team by my side, including:

I am convinced that I survived because Dr. Froehlich and my other doctors were always on the cutting edge of new treatments for this terrible disease. I always felt that I was getting the best and most innovative treatments. I never had any doubt we were proceeding correctly. I had, and continue to have, complete faith in the dedicated doctors and medical personnel at UT Southwestern who saved my life.

Since February 2018, I’ve been feeling great and I continue to be cancer-free. I now find great joy in connecting with people who are going through experiences similar to mine. I am proud to be an original member of the patient family advisory board at UT Southwestern, which helps shape aspects of patient care.

I've also helped set up a partnership with Imerman Angels, an international program that enables one-on-one support among cancer fighters, survivors, and caregivers. I’ve mentored many great people through this program and offered ideas and perspectives to stay mentally strong through treatment.

For me, that meant setting immediate short-term goals. That might be, “I’m going to watch the Cubs play and Michael Phelps win a gold medal.” The next day it would be, “I’m in bad shape, but I’m going to get through whatever treatment I have today and get to tomorrow.”

Different things work for different people. One of my mentees finds strength through meditation. You have to find what works for you.

Today, I’m back to swimming, biking, and lifting weights. I eat healthy and try to stay positive, because if the cancer comes back, I want to be ready to fight it again. And I know I’ll have a great team at UT Southwestern and Simmons Cancer Center fighting with me. 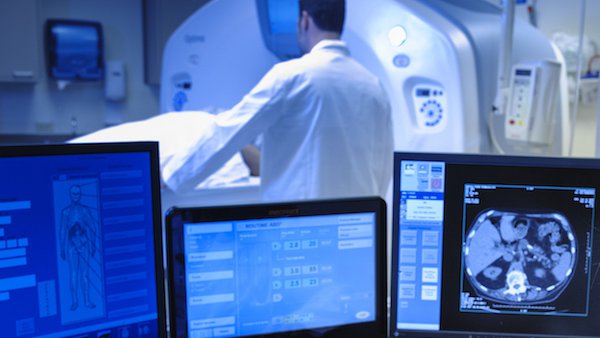 The future of immunotherapy

Terry's story shows the powerful effects, as well as the challenges, associated with immunotherapy. It is a relatively new treatment, and we continue to refine it and use it in new ways. We’ve seen how it works against melanoma, as well as kidney cancer and lung cancer.

And while immunotoxicities are not what we want, there is some data to suggest that patients who get them are more likely to respond to the treatment. We don’t know exactly why, and through clinical trials we are working to prevent side effects while continuing to reap the benefits of immunotherapy.

Clinical trials offer gold standard of care plus the newest available treatments, often at little to no cost to patients. These studies help us advance treatment options for more patients.

If you or a loved one is diagnosed with metastatic melanoma, ask your doctor about immunotherapy. Find an academic medical center that has teams of experts in place not only to manage your care, but also the potential side effects of treatment.

We’ve only scratched the surface of what immunotherapy can offer cancer patients. But at UT Southwestern and Simmons Cancer Center we are determined to continue improving it to help more patients like Terry beat this disease and lead longer, healthier lives.

To find out whether you or a loved one might benefit from immunotherapy, call 214-645-8300 or request an appointment online.

What does the rectal cancer trial's 100% remission rate mean for young patients?

The ART and science of targeting gynecologic tumors

Osteonecrosis of the jaw: Treating bone loss triggered by drugs for osteoporosis, cancer