In 2018, the Ob/Gyn team at William P. Clements Jr. University Hospital had the pleasure of delivering a baby boy, Preston, who was carried by a gestational carrier (GC) – a woman who carries and delivers a baby for parents who can't conceive on their own.

Preston's parents, John and Joseph Cramer, weathered a long journey to fatherhood. After looking into adoption and weighing the timelines and financial considerations, they opted for gestational surrogacy.

As two dads-to-be going through this process, they had to do a lot of extra legwork that heterosexual or straight couples might not have to face.

John and Joseph were kind enough to compile six tips for same-sex couples who are considering gestational surrogacy. Take a look!

6 tips from our gestational surrogacy journey

From John and Joseph Cramer

Planning is important for any pregnancy, and it’s vital for gestational surrogacy – particularly when the intended parents are not a heterosexual or straight couple.

We considered adoption. However, we decided to try intrauterine insemination (IUI) four times before moving forward with gestational surrogacy which can be very expensive.

Sometimes insurance pays a portion or all for in vitro fertilization (IVF), IUI, and GC health care, and sometimes adoption is the least expensive route. So, it's important to weigh all your options both financially and emotionally before choosing your path to parenthood.

From deciding to work with a GC to holding Preston for the first time, the entire process took nearly 18 months. Our doctor, Martin Hechanova, M.D. – as well as our IVF doctor and parent support groups in the gay community and on social media networks – helped us gather the practical and specialized knowledge we'd need as expecting and new parents.

Whether you choose gestational surrogacy or another route, we hope these six tips will help you navigate some of the challenges we faced in the months leading up to becoming dads.

1. Get firsthand advice and support

We had no idea how common gestational surrogacy was when we set out on this journey. Approximately 2% of pregnancies involving assisted reproductive technology use a gestational carrier.

After reaching out in our community, we discovered that a straight couple in our neighborhood had conceived through gestational surrogacy. Several of our gay couple friends shared that they were considering it, too.

Social media and the web were also wonderful resources to connect with people who had unique perspectives about gestational surrogacy. One site, Men Having Babies, was the first resource we tapped when we started down this road. It offers user-generated tips like a typical parenting group on Facebook, as well as workshops and conferences around the country.

Through all these resources, we felt as prepared as any new parents could be. But we certainly didn't know everything – we had our fair share of moments in which we relied on the wisdom of veteran parents, including our own parents and siblings. 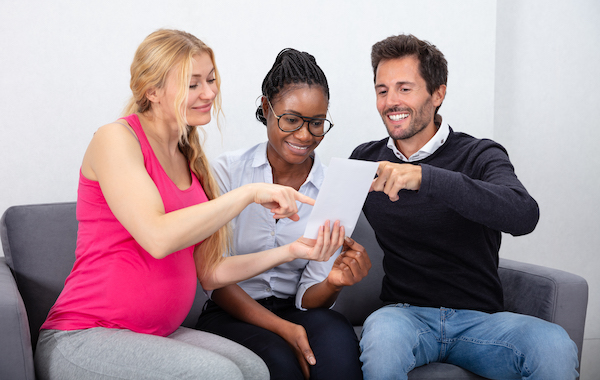 What to expect when you’re expecting – via gestational surrogacy

One of our favorite "what the heck do we do?" situations was learning that diapers are sized by the baby's weight. At the hospital, Preston wore newborn diapers, and we received diapers in many sizes as baby shower gifts. When one pack ran out, we'd just reach for the next.

Then a few weeks later, Preston seemed to be peeing nonstop. He was overflowing his diapers, and we didn't know what to do. Then a friend clued us in to check the numbers on the diaper box. We had been using 1 and 2 sizes versus the “N” newborn diapers.

You will face many legal issues throughout the experience. We found it invaluable to hire a family practice lawyer who had expertise in working with same-sex couples and navigating the legalities of gestational surrogacy, which vary from state to state.

You and your lawyer must be up to date on state laws regarding:

Depending on where you live, you might also have to prepare legal documents to terminate the parental rights of the GC and facilitate adoption of the baby at birth by the intended parents.

We researched several attorneys before we selected a Dallas attorney who was well-versed in the Texas surrogacy law. Our lawyer was also gay and empathized with our need for knowledge and put us at ease when we had questions along the way.

3. Choose the right hospital and Ob/Gyn

We met with two or three doctors before choosing Dr. Hechanova. He and his Ob/Gyn colleagues, the labor and delivery nurses, and all the staff we encountered at Clements were accepting and kind.

We worked with Dr. Hechanova to create a family-centered birth plan – or really a post-birth plan – for our preferences during the first few days of Preston's life. The team did everything they could to make our birth experience inclusive and memorable.

Preston was delivered by planned cesarean section (C-section), and the team was very accommodating. Typically, only the patient (the GC) and one other person are allowed in the operating room. But the delivery team made an exception and allowed us both to witness Preston's birth.

They were even able to secure recovery rooms side by side – one for the GC, and one for us to bond with Preston right after his birth. Since we didn't get the traditional experience of bonding with the baby during pregnancy, this was especially meaningful.

4. Understand all the risks of pregnancy and surrogacy

Ultimately, the Ob/Gyn's first priority is the health of the GC – she is their patient, and her health was the top priority. Going into the process, we all had to understand that.

During our counseling prior to the pregnancy, we discussed all the situations that could arise, including the risks of birth defects, health issues the GC might face, what might happen if the baby came early, and so on.

Approximately 10% to 20% of pregnancies result in miscarriage. We had four failed IUI attempts before our GC became pregnant with Preston, which can increase the costs associated with surrogacy. People involved in surrogacy experiences must prepare for both the common and unexpected situations that can arise during pregnancy.

Related reading: What to expect when you’re expecting – via gestational surrogacy

5. Stock your nursery with confidence – and patience

The gay community at large has had to be steadfastly patient as more straight people acknowledge unconscious biases against same-sex couples. Even though we didn't face any discrimination to speak of during the gestational surrogacy journey, there's often an underlying apprehension around doing things that "straight people do," like registering for baby gifts.

Preparing to become dads raised new concepts we hadn't really thought about before. For example, most new parent gear and gifts are heteronormative: "Congratulations, Mom and Dad," and so forth. We weren't really upset by that, but some of our friends and family felt awkward about the standard.

New parent literature was similar. We found that most of the child-rearing and parenting literature focused on these topics and gender roles – very little spoke to raising a child with whom you didn't connect through a traditional pregnancy.

To fill those gaps, we reached out to friends online and in real life who had been through this experience. While having more data and text to reference would have been nice, their real-world recommendations helped us find our own path as we bonded with Preston.

Whether you're straight, gay, or single, everyone will have their opinions about how to raise your child. And we got plenty of them from our family members and friends! For example, some well-meaning family members worried that having no female presence in our home would negatively affect Preston's health and happiness.

While we appreciated their love for him, we had to kindly but firmly remind them that we were as prepared as any new parents could be. Daddy and DaDa would be more than enough to raise Preston and love him unconditionally.

We hope that our story will help you as you choose the best path to parenthood for your growing family. If you choose surrogacy, don't hesitate to reach out for support from people who've been there.

Do your research and connect with experts who can give you the knowledge to make informed decisions – and providers who will help you achieve a supportive, memorable birth experience.

If you're considering surrogacy, start by discussing your preferences with an Ob/Gyn. Please call 214-645-8300 or request an appointment online.

More in: Your Pregnancy Matters, surrogacy

Is it safe to get pregnant during the COVID-19 pandemic?

Is it safe for pregnant moms to take a road trip during COVID-19?

New and expecting moms: Don’t skip these health visits during the pandemic