Chair of the Department of Radiation Oncology

Robert Timmerman, M.D., FASTRO, is Professor and Chair of the Department of Radiation Oncology, as well as Professor of Neurosurgery, and is the holder of the Effie Marie Cain Distinguished Chair in Cancer Therapy Research. After earning a master’s degree in reactor physics, he completed medical school in his home state of South Dakota, followed by a residency in radiation oncology at The Johns Hopkins Hospital.

Early in his career, Dr. Timmerman specialized in treating brain tumors and other cranial abnormalities with devices like the Gamma Knife, an extremely precise, noninvasive radiosurgical tool that employs multiple angles to deliver gamma radiation. He was intrigued by the idea of moving this sort of multidirectional, precise treatment to other areas of the body. But there was a major hurdle: tumors inside the head don’t move because the skull is immobilized with a frame during Gamma Knife treatment. By contrast, tumors in the body can move a great deal due to activities like breathing and movement of waste through the intestines. But with more sophisticated image guidance and tracking, Dr. Timmerman and a few others began developing a method (known as SAbR or SBRT) by which it was possible to account for movement and still safely deliver this treatment. Dr. Timmerman became known for his leadership in developing clinical trials to show how well SAbR worked in different parts of the body.

One of Dr. Timmerman’s greatest successes was the development of a trial that demonstrated inoperable lung cancer patients treated with SAbR could have considerably higher tumor control than with conventional radiation while still mostly avoiding toxicity. This provided hope to a whole new class of patients – the elderly, those with multiple health conditions, and others – who previously faced poor odds of beating their cancer. His treatment method has now become the new standard of care for this class of patients.

Dr. Timmerman currently directs training courses in stereotactic radiotherapy both at UT Southwestern and nationally for members of the national Radiation Therapy Oncology Group. He is a highly sought-after guest speaker and has authored or co-authored numerous peer-reviewed articles and textbooks.

With his patients, he continues to focus on diseases of the central nervous system, including cancer of the brain and spine, as well as lung cancer. He also specializes in seeing children and young adults who are still growing – those for whom extremely precise treatment is likely to result in better long-term quality of life.

Dr. Timmerman specializes primarily in treating adults and children with brain tumors. He was one of the first researchers in the world to use specialized treatment techniques developed for brain tumors to treat cancer in the body. That technique is currently known as stereotactic ablative radiotherapy (SAbR) or, alternatively, as stereotactic body radiation therapy (SBRT). This revolutionary technique relies on highly advanced imaging technology and sophisticated planning software to deliver an extremely potent dose from multiple angles – and it has been shown to offer better cure rates in some instances, particularly for cancers that have spread (metastasized). Dr. Timmerman has championed the use of SAbR globally and has served as the lead investigator in several national trials designed to evaluate the efficacy and safety of SAbR to treat cancer in the lung, liver, spine, and prostate.

“I am motivated by the need I see every day in the clinic to provide better treatments for our patients,” says Dr. Timmerman. “Technologies have developed in the last few years that have yielded game-changing, paradigm-shifting approaches, allowing us to reconsider how radiation is delivered in combination with surgery, chemotherapy, and other systemic therapies.”

"People with cancer are living much longer, so we are aiming to deliver treatments that are more tolerable and create fewer side effects.” 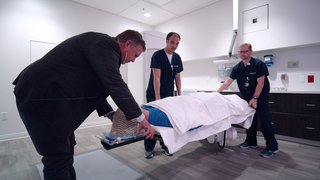 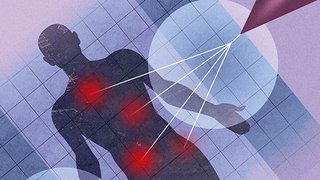 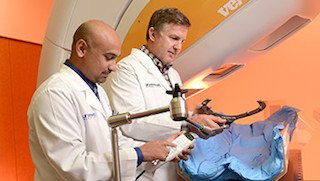 A new tool in the fight against lung cancer: SBRT 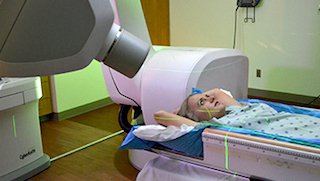