Our Movement Disorders team has a national reputation for Parkinson’s disease care and clinical trials, making UT Southwestern a referral hub for doctors across North Texas and beyond.

Parkinson’s disease (PD) is a progressive, degenerative disorder of the nervous system that causes people to gradually lose control over movement and other functions. The cause of PD is unknown, and currently there is no cure.

The physicians in UT Southwestern’s Movement Disorders Clinic have advanced training and significant experience in managing PD. Our team collaborates with specialists across the medical center to help patients continue living their fullest possible lives, through a combination of treatment and rehabilitation.

UT Southwestern offers coordinated care for patients with Parkinson’s, providing the full range of services and support needed to diagnose this illness and manage its symptoms and complications.

While a primary cause for PD is not yet known, certain risk factors can increase a person’s likelihood of developing the disease:

The diagnosis of Parkinson’s disease can be devastating. But one UT Southwestern School of Health Professions alumnus is helping patients “knock out” the damaging side effects through boxing.

Everyone with PD will experience symptoms differently. For example, many people experience tremors as their primary symptom, while others might notice weakness, difficulty walking, or stiff muscles.

In addition to the primary signs of Parkinson’s, many other symptoms are associated with the disease, such as:

PD can be difficult to diagnose because there’s no specific test for it. At UT Southwestern, our physicians base diagnosis on a patient’s medical history and a thorough neurological exam. We might ask patients to perform tasks to assess the agility of their arms and legs and evaluate muscle tone, gait, and balance.

Certain tests can help support a PD diagnosis or rule out other conditions with symptoms that imitate Parkinson’s. For example, DaTscan is an imaging test that reveals the level of dopamine in the brain, which is markedly decreased in patients with PD. DaTscan can help differentiate PD from essential tremor, in which brain dopamine levels do not change.

In addition to the examination, the patient might be given a medication commonly used to treat Parkinson’s. Significant improvement with the medication – such as better management of walking, movement, and tremors – often confirms a diagnosis of PD.

Although PD has no cure, the symptoms of the disease are treatable.

Because each patient experiences symptoms differently, physicians base each patient’s treatments on his or her specific symptoms. The Movement Disorders team works closely with other UT Southwestern specialists – such as those in psychiatry and speech, physical, and occupational therapy – to provide patients with individualized care to manage symptoms and maximize mobility, balance, and coordination.

Treatments for Parkinson’s disease include:

The benefits and disadvantages of medications can be different for each individual. Medications that might be prescribed include:

Patients often see significant improvement after beginning PD medication. Over time, however, the benefits of drugs become less consistent for many people. Advanced treatment options (as listed above) are usually then considered.

Rehabilitation is a key element of an effective PD treatment plan. The UT Southwestern rehabilitation team includes nurses, neuropsychologists, psychologists, and occupational, physical, recreational, and speech therapists. This team approach maximizes each patient’s ability to take part in activities at work, at home, and in the community.

Whether a person’s symptoms are mild or severe, all Parkinson’s patients benefit from an exercise program. Exercise can help people with PD stay active and relatively limber, improve balance and motor coordination, and even slow the progression of the disease. UT Southwestern specialists customize exercise recommendations for each patient’s particular needs and abilities, whether it’s obtaining a gym membership or engaging in professional physical therapy.

Support for People With Parkinson's Disease

If a patient wishes, the Movement Disorders team maintains an ongoing relationship that includes follow-up appointments with physicians and advanced practice providers to monitor the condition as it progresses. Family members are included in discussions about the goals of a patient’s treatment and rehabilitation program. Caregivers have access to services such as psychological counseling, support groups, and educational programs.

UT Southwestern also hosts an annual Parkinson’s Disease Patient and Caregiver Symposium for patients, their families, their caregivers, and anyone interested in learning more about the disease. The symposium reviews the latest clinical treatments, ongoing research projects, new drugs, and leading-edge developments that are on the horizon.

UT Southwestern research programs are addressing clinical questions such as how best to treat PD and how to slow its progression. Among the most important of these investigations is a long-term National Institutes of Health (NIH)-funded trial led by Richard Dewey, M.D., aiming to discover a biomarker for PD progression. Identifying a biomarker could accelerate the discovery of new therapies or perhaps even a cure.

Patients at UT Southwestern and their family members benefit from opportunities to participate in clinical trials. Clinical trials offer patients not only access to the latest advances in treatment and technology but also the opportunity to add to the knowledge about the disease and help improve treatment for others in the future.

Break the silence of aphasia with specialized speech-language rehab 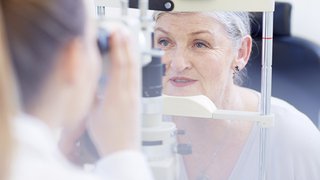 'It's like they flipped a switch': How HIFU relieved man's tremor after 50 years